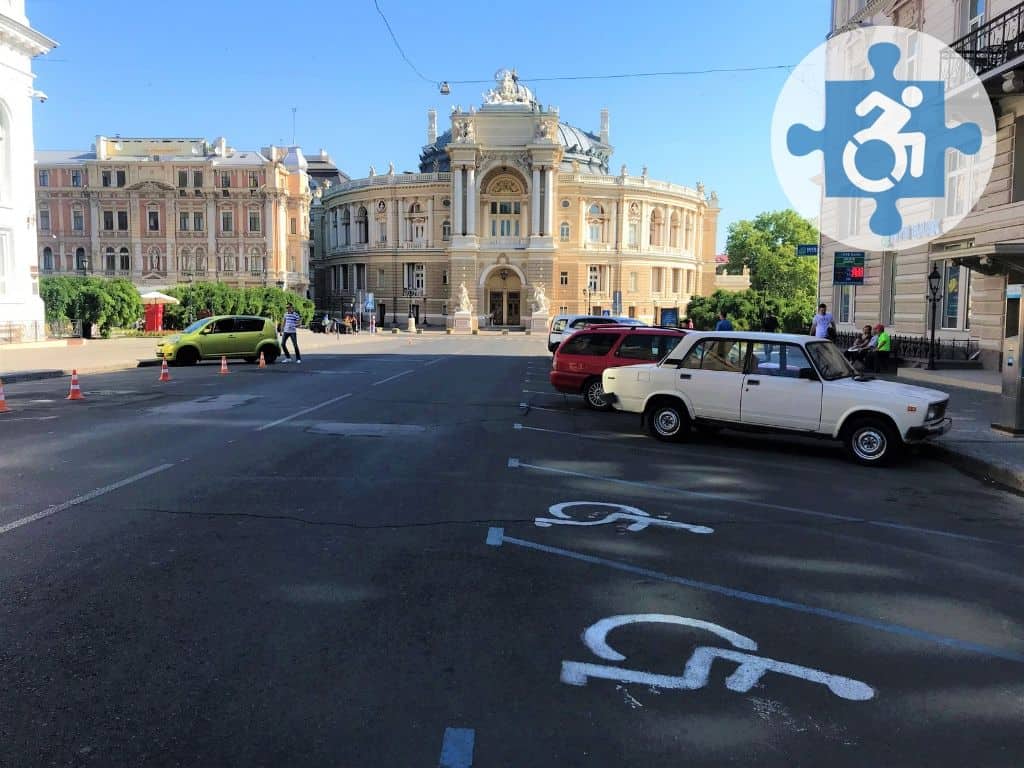 Wheelchair Accessible Things to do in Odessa, Ukraine

Odessa is a stunning city on the Black Sea of Ukraine. You’ll be greeted with delicious food, friendly locals, and beautiful, tree-lined streets. With a little planning, there are plenty of things to do in Odessa for wheelchair users. This detailed guide will help you make the most of your Odessa holiday.

The sidewalks in Odessa are nothing short of remarkable. They’re wide enough to fit at least a one-way road, if not a two-way road. The best part is, these wide sidewalks aren’t characteristic of only the center of the city. You can stroll down any side street and expect endless space for you and your chair.

Unlike Kyiv, the capital of Ukraine, Odessa is packed with cobblestone roads. And we’re not talking neatly lined, tiny rounded cobblestone. We’re talking massive stone, jutting up in all directions.

Don’t be too intimidated, though; the cobblestone is almost entirely on the streets, with almost all sidewalks being brick or paved. Therefore, you’ll most likely only ever need to put up with cobblestone at crosswalks.

There used to be a law in Odessa stating that a tree had to be planted in front of every apartment window. As such, sidewalks are packed with trees. In some cases, sidewalks are even two trees deep! They make for beautiful scenery and offer wonderful shade on sunny days.

The trees along the sidewalks in Odessa aren’t an issue in and of themselves. However, on side streets, people oftentimes take advantage of the wide sidewalks to park their cars.

Trees + cars = the possibility of you needing to get creative with your maneuvering around them.

When you’re exploring the most touristy parts of downtown Odessa, you’ll encounter nothing but well maintained paved sidewalk surfaces (excluding the cobblestone crosswalks).

However, outside of the city center, and even on many side streets branching out from the center, the sidewalks aren’t as well maintained. A large portion of this issue stems from tree roots buckling the pavement.

We’re not trying to discourage you from exploring the side streets- it’s a fun and off-the-beaten-path kind of experience that you should do in Odessa. However, just be on the lookout for bumps along the way.

Wheelchair accessible things to do in Odessa

Now that we’ve covered the quality of sidewalks in Odessa, let’s talk about all the wheelchair accessible things that those sidewalks lead to.

Stairs are an odd activity to include in a list of wheelchair accessible things to do, but hear us out- the Potemkin Stairs in Odessa are a sight to see.

The stairs are an architectural masterpiece, since from the top they look like just a few steps. However, from the bottom you can see all 192 steps that go up a rather steep hill.

There’s an accessible funicular that runs alongside the stairs, offering an easy way to move from the top to the bottom. The line can get long and there isn’t cover from the elements, so make sure to prepare for the sun/rain appropriately.

Travel Tip: If you want to skip the funicular line, head down to the right when staring up at the stairs from the bottom. You’ll encounter a free, self-service elevator that people seem to forget- or not know- about.

The Opera and Ballet Theater is one of the most famous places to see in Odessa. A large plaza surrounds the theater, making it easy to explore the circumference.

The theater is accessible by means of a side door, which has an intercom. However, the ticket booths require stairs to get to, meaning that you’ll need to make your reservation in advance.

Once inside, there are elevators to take you to the floor level you booked. The online ticket process isn’t overly straight forward, with some items in Ukrainian, so you may be better off asking your hotel to help you out. They can also call the theater to give them a heads up of your arrival time so that they’re prepared to meet you.

Keep in mind that attendees are required to dress up for the Opera and Ballet Theater. According to the theater’s website, shorts, t-shirts, vests, clothes, and shoes for sport and beach are not allowed.

The Transfiguration Orthodox Cathedral is the first and largest church in Odessa. However, it looks and is new. The cathedral was destroyed during the Soviet Union and the rebuilding process finished in 2003.

Your best bet is to go with someone- preferably someone who speaks Ukrainian or Russian- who can go inside the cathedral to find someone to open the door for you.

Located in the heart of downtown near the theater, Derybasivska Street is one of the must-see things to do in Odessa. Although it’s a cobblestone pedestrian street, paved sidewalks line either side of Derybasivska.

Derybasivska is home to lots of restaurants and shops. The area comes alive, especially in the evening, as this is one of the best areas for nightlife in downtown Odessa.

The Privoz Market is stunning with bright orange painted walls and grandiose architecture.

Don’t be fooled, though- inside those walls, you’ll find a bustling market scene.

The market is fully accessible, including the indoor meat and fish portion which has ramps leading to all its entrances. For the most part, aisles are wide. However, you’ll come to a few spots with narrower passageways.

The Privoz Market is located a bit outside the main center, at about a 20 – 30 minute walk from the Opera theater.

With Odessa’s location on the Black Sea, it wouldn’t be right to leave without a visit to the beach. However, depending on your beach style, it might be a quick one.

There are accessible entrances to Arcadia Beach (the most famous party beach), and the beaches around Arcadia, located at periodic points from parking areas. However, the best accessible entry is by means of Langeron Beach.

Located by an aquarium and food court, Langeron offers ocean views from cement and wooden walkways. There are literally people lining the area sunbathing here.

Cement and wooden walkways also periodically lead out from sandier beach areas. Regardless of what you choose, it’s worth mentioning that the beaches in Odessa aren’t stellar. The ambiance is fun during the summer, but it’s hard to imagine the water quality being very good considering that the beaches are so close to Odessa’s port.

For an off-the-beaten-path activity, consider visiting the Steve Jobs Monument. This monument of a hand with the Apple logo on it was created by university tech students after Steve Jobs passed away.

Getting to the Steve Jobs Monument will require tackling the sidewalks of side streets. However, it’s a fantastic option if you’re looking for a less touristy experience and to get a glimpse of a district where locals live.

The One Wall House is famous in Odessa, although it certainly isn’t the only building designed in this style.

Depending on the angle that you view the house, it appears that the house only has one wall. There are a few theories for why this now apartment building was built as such, but the two that make most sense are a lack of land and/or a lack of money to build four walls instead of three walls.

9. The House with Atlantes

While we’re on the theme of buildings, let’s talk about the House with Atlantes. The house is known for two statues of Atlantes holding the heavens on their backs.

Considering that there is so much striking architecture in Odessa, we didn’t find this one to be particularly amazing. However, plenty of people do, as there is even a tourist plaque in front of the building offering historical context.

There’s also a restroom between downtown and the Privoz Market, if you’re walking along the upper pedestrian park that follows the Black Sea.

Now that we’ve covered wheelchair accessible things to do in Odessa, you must be wondering how to get around the city.

HolidayTaxis offers private, wheelchair accessible transportation from the Odessa airport. You can schedule your transfer online with them in advance.

Not only does HolidayTaxis offer airport services, but they can arrange customized, multi-day accessible transportation for you. If you’re planning your trip more than 72 hours in advance, you can fill out their online form to get a quote. Otherwise, give them a call at their U.K. number: +44 1273 828 200.

We hope that this post has given you ideas for wheelchair accessible things to do in Odessa. If you’ll be traveling to Odessa, feel free to send us any questions in the comments section. Do you already have experience with accessible travel in Odessa? Please share your own experience, tips, and tricks! 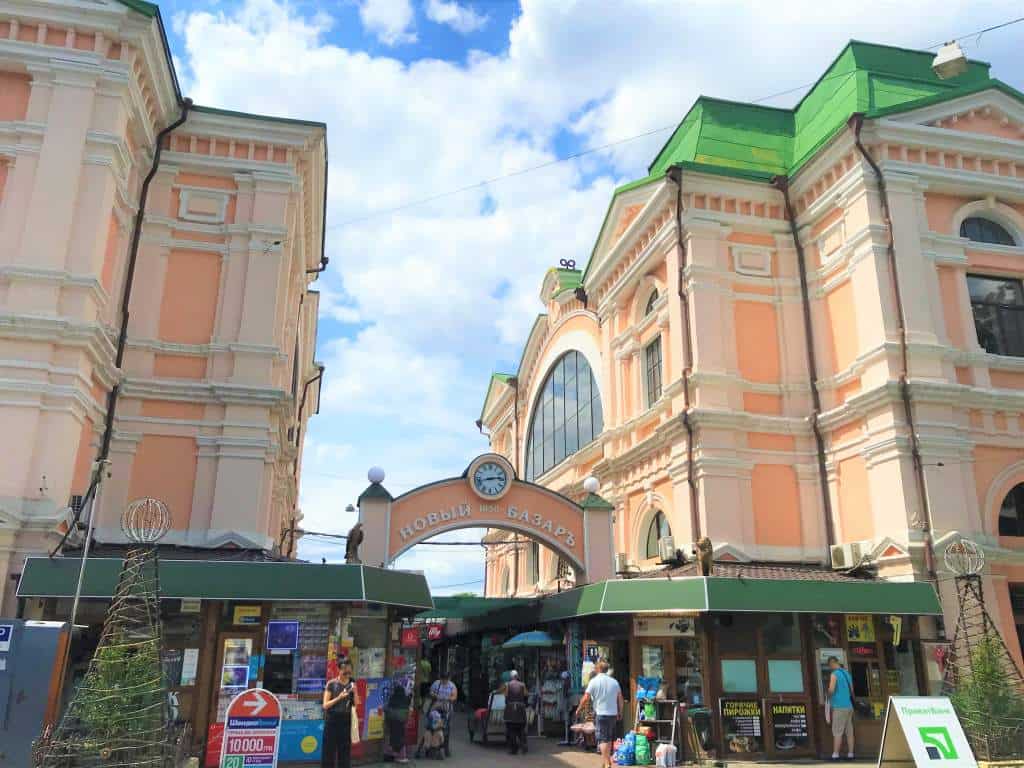 Located on the Black Sea, Odessa has become a popular tourist attraction in recent years as people seek new beach destinations, due to the conflict in Crimea.  However, Odessa offers […]