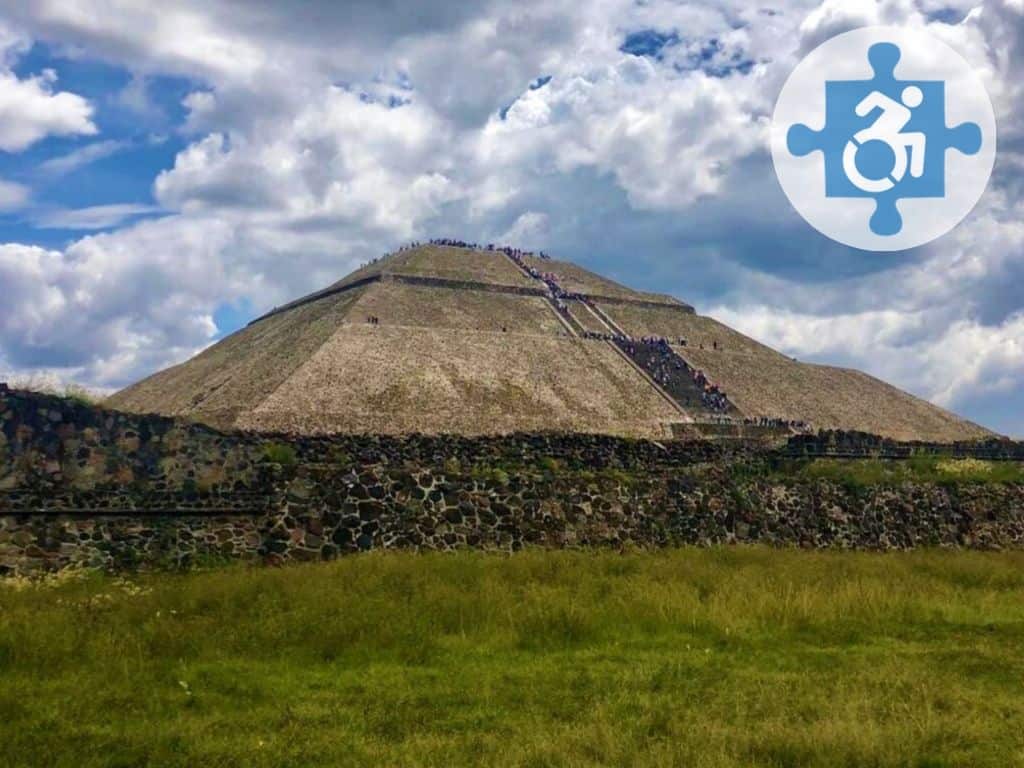 Teotihuacan by Wheelchair: The Accessible Guide

November 10, 2019By LauraPosted in Mexico City

The pre-hispanic city of Teotihuacan is a popular day trip from Mexico City. Although not fully accessible, Teotihuacan offers modified access in some areas for wheelchair users. This post will cover everything you need to know about visiting Teotihuacan with a wheelchair.

Before we discuss how wheelchair accessible Teotihuacan is, let’s touch on its history.

Identifying the creators of the stunning Teotihuacan pyramids are up for debate among scholars, but one thing is certain- the Aztec encountered the abandoned pyramids and made them their home.

Teotihuacan comes from the Aztec language, meaning the “Place of Gods.” As such, the pyramids were a site of religious sacrifice…and storing. Archeologists have found a variety of decapitated animal and human bodies inside the ruins.

At its peak, Teotihuacan expanded over an area of eight miles. This area included the religious pyramids (the Sun and Moon pyramids being the primary religious sites) as well as housing which sprawled away from the religious area. When you visit, you’ll only cover a small section of the former civilization.

The collapse of the Teotihuacan civilization is as much of a mystery as who built it. As of 1987, Teotihuacan was named a UNESCO World Heritage Site and is now a common place for day-trippers to visit from Mexico City.

How to get to Teotihuacan by wheelchair

Teotihuacan is located about 50 kilometers northeast of Mexico City. You’ve got a few options to get there, depending on your abilities and comfort level of traveling independently.

Psst: Visiting Mexico City? Check out our post on 16 Wheelchair Accessible Things to do in Mexico City.

Large, comfy public buses serve Teotihuacan from the Terminal Central del Norte station. While the bus station itself is wheelchair accessible, including accessible restrooms, the buses require going up about three stairs.

Furthermore, upon your arrival to Teotihuacan by bus, you’ll be dropped off in an area that only has an accessible viewing platform. Therefore, driving or hiring private transportation is the best option for most wheelchair users.

Before you get too excited, keep in mind the following:

If you hire a driver, we recommend having them wait for you while you visit Teotihuacan. We’ll get into how long you’ll likely spend there shortly.

If you travel to Teotihuacan by car rental or another mode of private transportation, there are two wheelchair accessible parking spaces.

The parking spaces straddle the entrance to the ruins. So, by parking there you’ll be a stone’s throw away from starting your sightseeing.

Travel Tip: Avoid visiting Teotihuacan on Sundays. This is the day that Mexican residents can enter the ruins for free, so it’s typically extra crowded.

Gate 5 is the only gate at Teotihuacan with accessible parking. This gate is ideally located behind the pyramid of the sun and near a museum and an accessible restroom.

If you stay for the light show, which we’ll talk about soon, a nice entrance option is to enter at Gate 2. Just keep in mind that you’ll need to create your own accessible parking space in the unmarked dirt parking lot.

Wheelchair Accessible Things to do at Teotihuacan

You’ve made it to Teotihuacan! Now you must be wondering what you can do there as a wheelchair user.

Teotihuacan is located on a flat, expansive main road called Avenue of the Dead. The path leading from the entrance of Gate 5 will take you to this road.

The downside to Teotihuacan is that although the Avenue of the Dead is accessible, it’s not ideal terrain for wheelchair users.

The surface of Avenue of the Dead and the paths jutting from it are a combination of dirt, shallow gravel, and extremely old pavement. In many cases, any given area is a mixture of two or more of these materials. However, above all else, the shallow gravel is predominant.

For this reason, if you’re traveling with both a manual and power chair and are debating about which to use for Teotihuacan, we recommend taking your power chair.

Nonetheless, if you have a manual wheelchair, we don’t want to discourage you- Teotihuacan is beautiful and very much worth the visit!

While you’ll come across some bumps along the way, particularly between various materials in the path, you don’t have to worry about encountering large dips or potholes.

None of the pyramids at Teotihuacan are wheelchair accessible.

How long to spend at Teotihuacan

Getting to Teotihuacan from Mexico City will take you around an hour on the weekends and over an hour on weekdays, due to traffic.

Once at Teotihuacan, you’ll likely find yourself spending around 45 – 60 minutes at the ruins. That being said, if you’ll be traveling with able-bodied people who want to climb the pyramids, you could easily spend 2 – 3 hours in the area.

How to prepare for Teotihuacan

There is no shade at Teotihuacan.

It can get sweltering hot, especially during the summer. Keep in mind that Teotihuacan oftentimes has different weather from Mexico City. Therefore, make sure to check the weather before traveling.

Teotihuacan also receives lots of rain during the rainy season. There’s no shelter to escape the rain once you’re inside the ruins, so plan accordingly.

Below is a list of items we recommend you pack for your trip to Teotihuacan:

Fun Fact: Grasshoppers were everywhere along the grass-lined paths the day we visited Teotihuacan. Don’t be surprised if you accidentally roll over a handful! Perhaps unsurprisingly, grasshoppers were part of the local diet years ago and you can still find them on some restaurant menus around Teotihuacan.

Aside from rolling around the ruins, another fun activity to do at Teotihuacan is visit at night for the light show.

Much more than just a light show, the history of Teotihuacan is depicted through the show, using the Pyramid of the Sun as a screen.

If you decide to visit the light show, we recommend parking at Gate 5 first if you want to explore the ruins. Then, you can drive to Gate 2 where a (somewhat crumbling) cement ramp will lead you to an elevated viewing area with direct views of the Pyramid of the Sun.

Just keep in mind that Gate 2 requires going down some steep stairs in order to get to the ruins, so this is only a good gate if you plan on watching the light show or want a panoramic view of Teotihuacan without rolling through the ruins.

We hope this guide helps you with your Teotihuacan trip planning. Beautiful, relatively wheelchair accessible, and an easy day trip from Mexico City makes this a perfect stop to add to your Mexico holiday.

P.S.- If you’re looking to take another day trip from Mexico City, make sure to check out our post on Xochimilco for Wheelchair Users: A Complete Guide.

P.P.S.- Don’t miss our guide on Wheelchair Accessibility at Chichén Itzá if you’re planning on visiting this New Seven Wonders of the World while in Mexico.

Laura’s love for traveling started with a trip to Jamaica. Since then, she’s spent over five years living in Latin America and four years wandering the globe. She’s an early bird and backpacker at heart and can often be spotted with a dog or ten that she’s befriended along the way. Much of the content Laura writes on A Piece of Travel includes details on wheelchair accessibility, with the support of her brother-in-law and sister. You can learn about their accessibility endeavors here.

Laura's love for traveling started with a trip to Jamaica. Since then, she's spent over five years living in Latin America and four years wandering the globe. She's an early bird and backpacker at heart and can often be spotted with a dog or ten that she's befriended along the way. Much of the content Laura writes on A Piece of Travel includes details on wheelchair accessibility, with the support of her brother-in-law and sister. You can learn about their accessibility endeavors here. 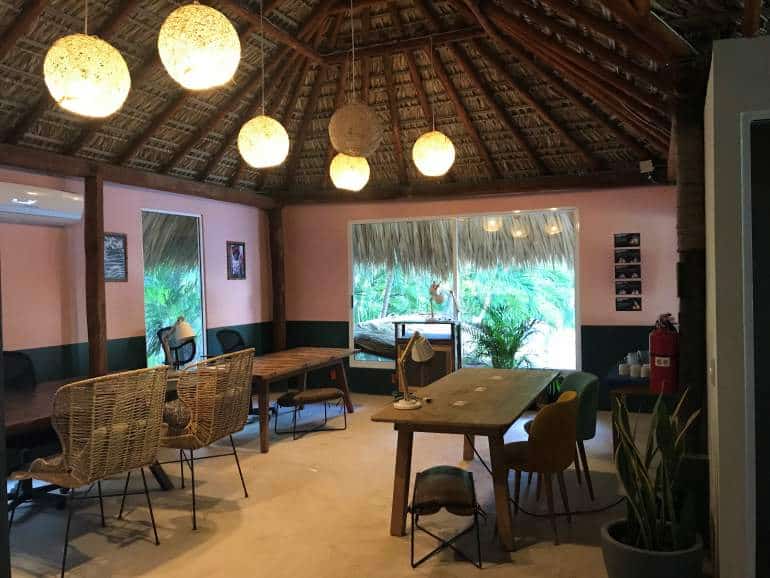 From Argentina to Israel, Selina hostels are popping up around the globe. And it’s no wonder—Selina has received multi-million dollar investments and acquired Remote Year. Their boutique-style hostels are packed […] 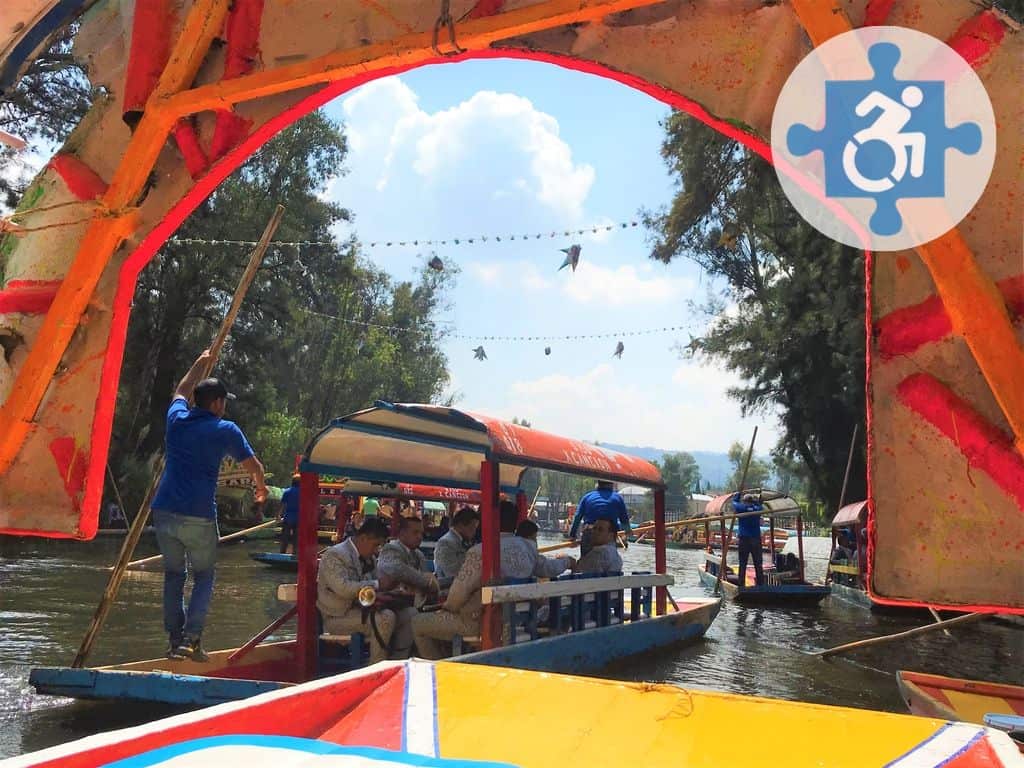 Did you know that Mexico City has a “Little Venice”? Boating on the canal of Xochimilco is a fun day trip and great cultural emersion. Even better? Xochimilco is quite […]

First time seeing a sun halo ✅ Sun halos are a

Dear Lima, I got tired of waiting to take a photo

It isn’t common to encounter an old cathedral th