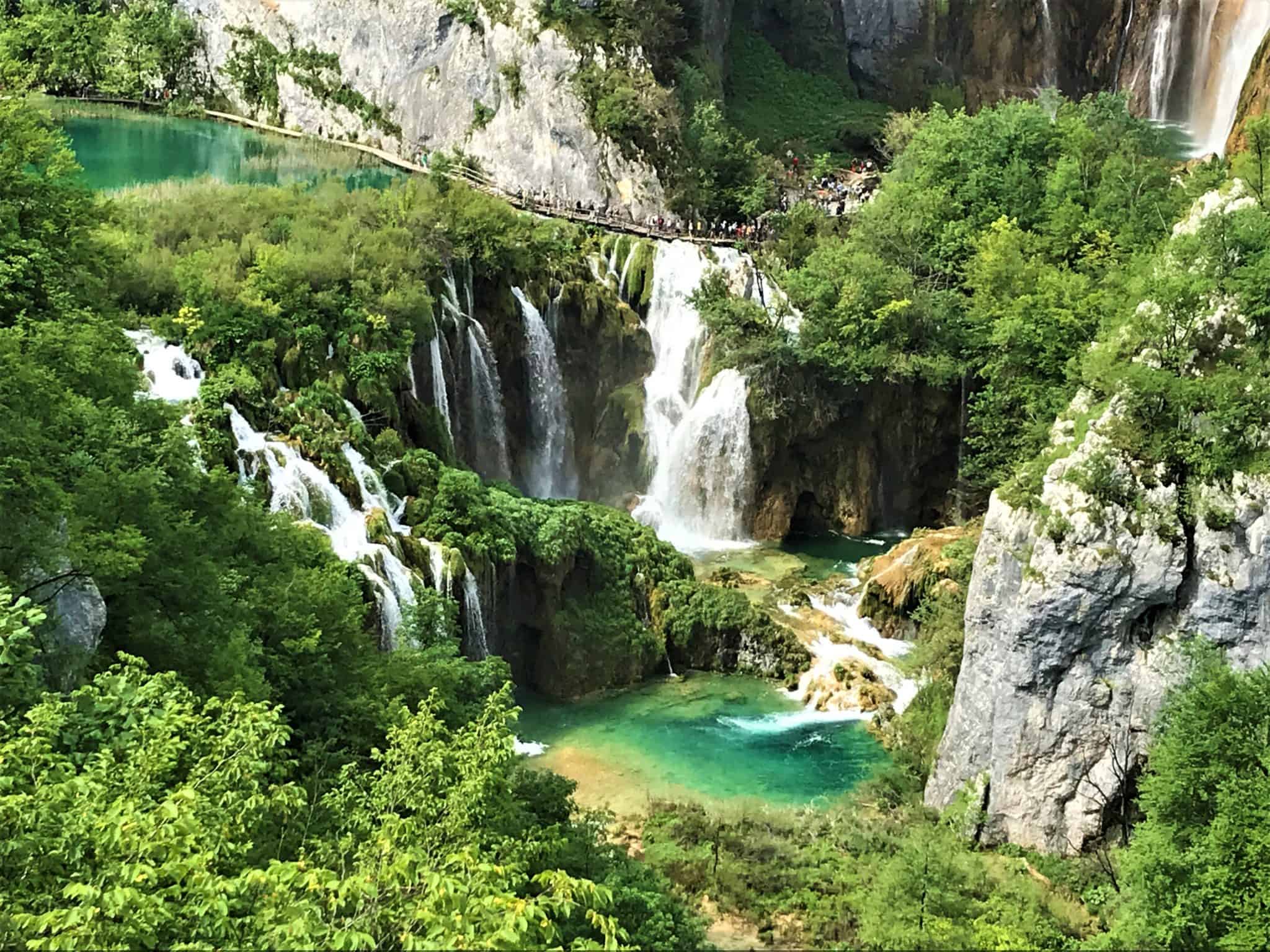 So, you’re going to Croatia. Among the decisions involved with choosing the best coastal destination, you may find yourself debating which two of Croatia’s most popular waterfalls to visit-  Krka National Park or Plitvice Lakes National Park. This detailed guide will show you the differences- and similarities- to help you choose the best waterfall experience for you.

Note: Some of the links in this post are affiliate links. If you make a purchase, we’ll make a small commission at no cost to you. This is how we continue expanding the content on A Piece of Travel, so we thank you for your support.

Context: Where I’ve been

Before we dive into whether Plitvice or Krka falls is best to visit, let me give you some background on where I’ve been.

I visited Krka National Park first, in June 2019.  One week later, I visited Plitvice Lakes National Park.  Therefore, I have a pretty even base to compare when it comes to weather and entrance policies.

Confession: I had the bar set low for Krka, since Plitvice is more renown. That was a mistake, and I’ll get into why shortly.

For details about the specifics of visiting Plitvice and Krka, don’t miss my posts on Plitvice Lakes National Park: The Ultimate Guide and Day Trip to Krka from Split: A Complete Guide.

Below is an overview of the similarities and differences between Plitvice and Krka.  We’ll get into the details of each of these points next.

Krka or Plitvice: The Similarities

With so many people out there talking about the differences between Plitvice and Krka, let’s go against the grain and start with the similarities.

Where there is water, there are boats.  If you’re traveling during the high season in Krka, you can take about a 25-minute boat ride from Skradin to Krka National Park, which is included in your park ticket.  In Plitvice, electrical boats serve certain points within the park.  These boat rides are also included with your park ticket.

Plitvice and Krka are both within national parks and have entrance fees.  In both cases, the cost of the tickets varies depending on if you’re traveling during high or low season.  Entrance fees to Krka are less expensive than Plitvice, but don’t get too excited…they’re still pretty pricey.

Below are links to the fees for each park:

If you’ve forgotten your middle school ecology lesson, it goes like this:

Of course, most people don’t want to wander around the falls in the rain.  So, in order to visit the falls at a time when there’s a good chance of little rain but fuller-looking waterfalls, aim to travel during mid-May through June. These months are right after the rainy season.

Anyone who knows me can vouch that I’d rather seek out aquatic life rather than sip on a cocktail waterside.  Both Plitvice and Krka are excellent places for fish sightings. You’ll easily see hundreds of fish during your exploration. It left me wanting to be a fish so that I, too, could hang out in the see-through blue water.

Snack stands are located in both parks.  In Krka, the stands are more evenly spread throughout the park.  They also offer some healthier options like seasonal fruit, dried figs, and nuts.

Snack stands are more sporadic in Plitvice and the snack options are sub-par.  Especially if you plan on doing one of the longer hikes, make sure to bring food (and water, of course!) with you.

There are a couple of restaurants at both parks, but the food is average, at best, and ultra-expensive.

Krka or Plitvice: The Differences

While there are similarities between Krka and Plitvice, the differences are greater. Let’s take a look at them.

What does this mean for you?

If you’ll be visiting Plitvice Lakes National Park, purchase your ticket online more than two days in advance.  If not, you’ll likely end up like me, purchasing your ticket in person and having to wait until the next available entrance time slot to visit the park.  In my case, I arrived around 8:00 am and the next available entrance ticket was at 10:00 am.

You can read all about my insider recommendations for navigating entrance policies at Plitvice in my post Plitvice Lakes National Parks: The Ultimate Guide.

When it comes to Krka, entry is easy.  You can buy your ticket on the spot and enter the park immediately.

If you’re on the fence about whether to visit Plitvice or Krka, chances are that location is a big factor in your indecisiveness.

Krka is located closer to popular tourist destinations like Split and Dubrovnik.  Plitvice on the other hand is nearer to Zagreb, Zadar, and Rijeka.

If you’re really far from one of the falls (2.5+ hours one way), I recommend choosing the closer one.

Plitvice and Krka are full-day experiences, so by spending a large portion of your day traveling, you’d be cutting into your precious exploration time at the falls.

Plitvice Lakes National Park is open 365 days of the year.

Krka National Park is closed on December 25th and 26th.

Below are links to the specific hours according to the season that you’ll be traveling:

Hold on.  Wasn’t “water levels” in the similarities section?

But, “water levels” also deserve a spot in the differences section since the proportional amount of water flowing over the falls is different between Krka and Plitvice, regardless of the time of year.

So, which spot wins for water density?

I know, I was surprised, too.

There’s a higher concentration of water flowing over the falls in Krka, regardless of the time of year.  Therefore, if you are looking for a fuller water experience, Krka National Park is for you.

Whereas Krka wins for waterfall concentration, Plitvice wins for waterfall height.  It’s nothing short of spectacular to be on the boardwalk of the lower falls at Plitvice Lakes National Park, looking up at the immensity of the water falling high above you.

How high are the highest falls at Plitvice?  78 meters.

For perspective, the Niagara waterfall is 51 meters, the Iguazu waterfall is 81 meters, and the Angel waterfall in Venezuela is the highest in the world at 979 meters.

In Krka, you have the option to pay for a longer boat excursion.  This will take you to areas higher up in the lake to the island of Visovac, including a visit to the Franciscan Monastery.

All boats in Plitvice National Park are included in the entrance ticket and are used as means to get you from one trail to the next.

Plitvice offers eight hiking paths around the lake, four at either of the two entrances.  The paths are designed for people of varying fitness levels. All include some version of an electrical boat trip, albeit in some cases very short. Some of the paths include a scenic train ride.

On the other hand, Krka has one main path that loops around the most famous part of the lake.  While there are other hiking paths available, they aren’t as well marked and promoted as the various paths at Plitvice.

Krka National Park offers a wheelchair accessible path that covers much of the same path as non-wheelchair users.  In fact, even the wooden boardwalk is accessible, provided that you’re okay with a few bumps along the way.

On the other hand, only the Veliki Slap lookout point is accessible at Plitvice. Stairs, steep slopes, and super bumpy cobblestone abound at the rest of the park.  Therefore, wheelchair users and anyone with limited mobility will get to explore more ground at Krka.

Krka is your place.

Since Plitvice is UNESCO protected, swimming isn’t allowed.  However, there are a few designated swimming spots in Krka, the most popular being by the Skradinski Buk Waterfall.

Just keep in mind that swimming at Krka is only allowed from June 1st to September 30th.  For all other times of the year, the current is too strong.

Don’t worry, both Krka and Plitvice have restrooms.

However, Krka National Park charges a fee to use their restrooms whereas the restrooms at Plitvice are free.  Maybe that’s what the extra money for the Plitvice entrance ticket is used for?

There’s the option to stay at one of a few hotels directly within and around Plitvice Lakes National Park. There are also options for camping.

At Krka, no one is allowed to spend the night inside the park.

However, there are two towns near Krka National Park, Šibenik and Skradin, which offer accommodation options.  They’re beautiful areas and a great way to see more of Croatia.

I arrived at Krka expecting to be underwhelmed.  Instead, I was in awe of the wooden boardwalks, fish, and blueness of the water.  As a result, when I went to Plitvice, that initial awe wasn’t quite as strong.

That being said, having seen both falls, if I had to choose just one to visit, it would be Plitvice. The reason being is that I love to hike, so having a marked 18.3km path was a dream.

However, if you’re still on the fence about which park to visit after reading this post, my advice is to choose the one closest to you.  Krka and Plitvice are both stunning, so you’ll no doubt enjoy your time at either.

So, what will it be…Plitvice or Krka?  Share your choice and reasoning in the comments section below.  I look forward to hearing your thoughts! 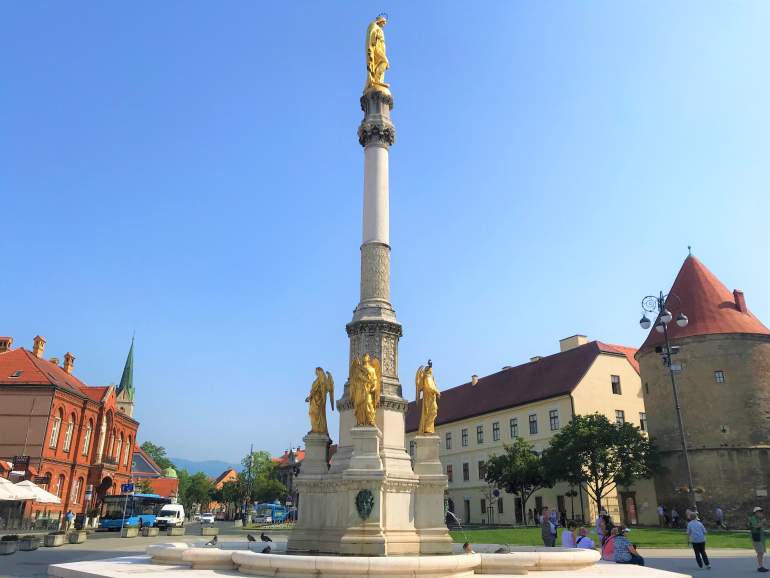 When you think of Croatia, does your mind drift to beautiful beaches and stunning waterfalls? While these places warrant the visit, Zagreb is a stunning city that deserves at least […] 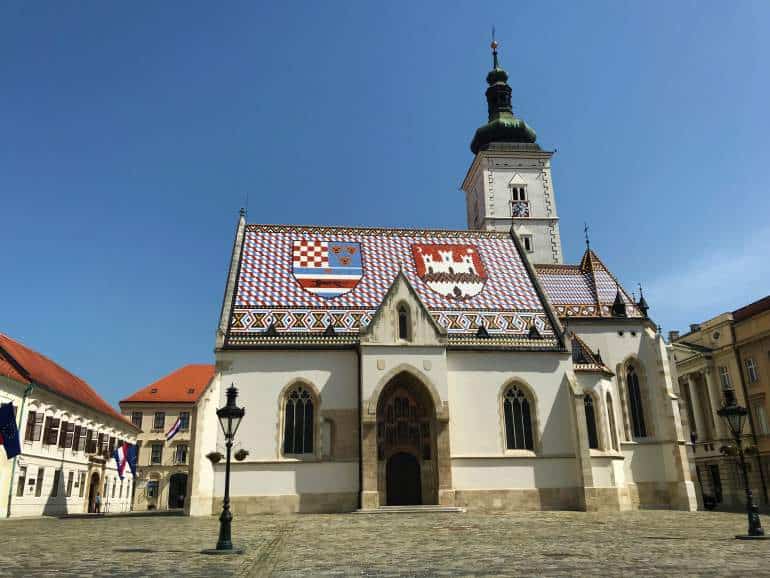 When you think of Croatia, you probably think of water. The Adriatic Sea, Plitvice Lakes, and the waterfalls in Krka are no doubt popular for a reason. However, Zagreb offers […]