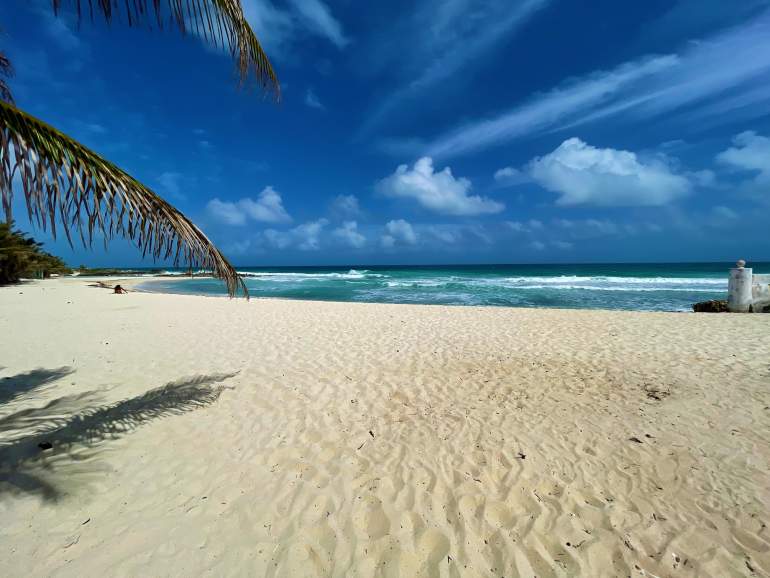 Isla Mujeres or Holbox Island: Which Is Better?

October 10, 2021By Laura OldsPosted in Cancun

Experiencing island life is a must when you’re visiting the Yucatan. But vacations only last so long, and people in your group may have different interests. So it might get you wondering—is it better to visit Isla Mujeres or Holbox Island?

So, it can help make the decision easier if you know your travel style. On the other hand, some people enjoy the vast differences between these two islands, making the choice even more difficult if time or money only allows you to visit one of them.

I spent two weeks in Isla Mujeres and a long weekend in Holbox Island in the spring of 2021. I’ll share my takeaways here so you can decide which island feels like the best option for you.

Accessible Note: If you’re a wheelchair user, make sure to take a peek at our posts on accessibility in Isla Mujeres and Holbox Island.

Note: This post contains affiliate links. If you make a purchase, we might make a small commission at no extra cost to you.

If you’re busy, this section is for you. The chart below offers a glimpse of the differences between Holbox Island and Isla Mujeres so that you can quickly get a feel for each.

Still with me? Great!

Let’s go over the points in the chart above in more detail.

Holbox and Isla Mujeres share the trait that arriving by ferry is the most popular choice.

In fact, when it comes to Isla Mujeres, going by water is the only option you have; if you wander around the island long enough, you’ll encounter an abandoned airport with a vandalized tower.

On the other hand, you can fly to Holbox Island. Given that you have to rent a private jet, it’s not a cheap task.

However, if you fill the plane with the maximum number of people allowed on these puddle jumpers (usually 5 – 7 passengers), the cost isn’t so prohibitive—especially if you’re of the mindset that time is money.

Speaking of time, you’ll need a good dose of it if you won’t be shelling out money for a private plane to arrive in Holbox. It takes about 2 hours to drive from Cancun to the Chiquila ferry port.

From there, you’ll need to wait for the next departing ferry. Luckily, between the two ferry companies that run this route, there are usually departures from Chiquila to Holbox every 30 – 60 minutes. The ferry ride itself only takes about 20 minutes.

Needless to say, Holbox Island isn’t the type of place that you can visit in a day from Cancun (much less other popular destinations in the Yucatan, which require an even longer drive).

However, it’s easy to take a day trip to Isla Mujeres from Cancun.

There are four ferry ports in Cancun where you can catch a ferry to Isla Mujeres. Make sure to check the ferry timetable, as some ports have limited daily departures. Puerto Juarez is your best option if you want to have the greatest number of ferry departures.

The ferry from Cancun to Isla Mujeres takes about 20 minutes. Once you arrive, you’ll be in the heart of the tourist center, located near Playa Norte.

Isla Mujeres and Holbox Island have a different feel to them, almost all of which comes down to how accessible Isla Mujeres is from Cancun.

As a result, you can expect to encounter packed streets and beaches in Isla Mujeres during the day. It also has a decent beach party scene, overflowing from Cancun’s massive nightlife.

Furthermore, there are ferries that run from Isla Mujeres to Cancun late in the evening, making it easy for day-trippers to make the very most of their time there.

That said, if you spend the night in Isla Mujeres, you’ll wake up to a peaceful island that you’ll feel you have all to yourself. Although there are early morning ferries that run there from Cancun, the bulk of tourists don’t arrive until 9:00 am – 10:00 am.

In contrast, Holbox Island’s idea of a “packed” beach is being a handful of beach towel lengths away from strangers.

It’s an excellent island for people looking to be in a quieter, more nature-oriented atmosphere. Speaking of nature, the beaches in Holbox undergo little maintenance, with the exception of hotels that might rake the beach directly in front of their property.

So, you can expect to encounter strings of seaweed, driftwood, and some small seashells.

On the other hand, Playa Norte in Isla Mujeres has that pristine, white sand beach that so many people picture when they think of the Caribbean. That’s because of the strict cleanup regimen that Isla Mujeres performs on their most popular tourist beaches.

As a final note, visiting Holbox Island doesn’t mean that you won’t find any nightlife. There are a handful of bars along the beach where people gather in the evening. It just has a quieter vibe than anything you’ll find in Isla Mujeres or Cancun.

Regardless of whether you choose to visit Isla Mujeres or Holbox, you’ll want to book your flight into the Cancun airport.

From there, you can either take a private plane to Holbox Island or travel to either the Chiquila or Cancun ferry ports by land to catch your ferry.

The bottom line is that you need to consider how much travel time you’re willing to dedicate to either of these islands, especially if you’re squeezing in Holbox or Isla Mujeres as part of a larger trip around Mexico.

Yep, that’s all I’ve got for this point.

Here’s a fun similarity between Isla Mujeres and Holbox: Both require golf carts to get around if your legs can’t take you there.

You’ll need a valid driver’s license and an alcohol-free stomach to explore the island of your choice by golf cart. And since both islands are small, you can truly explore every nook and cranny of them.

If you decide to visit Isla Mujeres, I recommend renting a golf cart and spending the night. The following morning, drive to Punta Sur before sunrise. That way, you’ll witness the very first spot that the sun touches Mexico each morning.

Holbox Island is arguably an even better place to rent a golf cart since the island is much larger, at 26 miles long.

When you’re golf carting around Holbox, you’ll get to spot lots of wildlife. You might even see some flamingos hanging out in the lagoon if you’re lucky.

If you don’t want to rent a golf cart, no worries—Holbox and Isla Mujeres both have golf cart taxis, so you can easily get to where you want to go.

5. Juggling How Much You Want to Drain Your Wallet

I won’t beat around the bush here—if you want a cheap beach destination, head to a place like Playa del Carmen; as is the case with so many islands, Isla Mujeres and Holbox are expensive.

However, of the two, I found Isla Mujeres to be more expensive than Holbox. I think this has to do with the difference in downtowns between Holbox and Isla Mujeres.

For example, the downtown area in Isla Mujeres is where the heart of the tourist center is, as it sits just back from Playa Norte.

On the other hand, Holbox’s downtown has a more local vibe, and you can easily wander down side streets to find cheap, delicious food.

When it comes to Isla Mujeres, all hope isn’t lost, though. I was determined to eat cheaply during my time there and did a pretty good job of it, if I do say so myself.

So, if you decide to visit Isla and are working with a tight-ish budget, check out my guide on cheap Mexican restaurants in Isla Mujeres.

Both Isla Mujeres and Holbox offer hostels. Holbox seems to have more hostels and budget choices, though (assuming you stay in the downtown area—more on this soon).

6. Things to Do When You’re There

The number one attraction of both Holbox and Isla Mujeres is their beaches.

So, what to do with the rest of your time? Below are some suggestions for things to do in Isla Mujeres:

And now, these are some activities to do in Holbox:

If you want to learn about these activities and more on Holbox Island, I’ve put together a guide on what to do in Holbox to help you out.

7. Figuring Out Where to Stay

When it comes to accommodations on Isla Mujeres and Holbox, there are several items to consider.

For starters, Holbox tends to have more resorts and upscale hotels than Isla Mujeres. Much of that comes down to Isla Mujeres being a popular day trip from Cancun, where people have their picking of 5-star luxury hotels.

However, it also has to do with Holbox being a place where people typically spend a minimum of two nights, given the amount of time it takes to arrive there.

Another item to consider is location.

In Isla Mujeres, the majority of hotels, including the nicer ones, are clustered around Playa Norte. That means you’ll be in the heart of the tourist area and have access to Isla’s best beach at your fingertips. It also makes for a louder and more people-packed experience.

On the other hand, the nicest hotels on Holbox Island tend to be a golf cart ride away from downtown. You’ll have access to a private beach and among the quietest beach atmospheres that you’ve likely ever experienced. However, you’ll need to hop in that golf cart to get into town.

So, What’ll It be? Isla Mujeres or Holbox?

Isla Mujeres and Holbox both have wonderful qualities, although most of them are different from each other.

I hope this post has helped shed light on which island might be the better fit for your interests and travel style.

If you’re not 100% on visiting Holbox or Isla Mujeres, other articles I’ve put together could help. Consider reading my guide on Isla Mujeres vs. Cozumel. Alternatively, if you’re thinking about beaching it on the mainland, my post on Cancun, Tulum, or Playa del Carmen highlights things you should consider.

If you still have questions about visiting Holbox or Isla Mujeres, leave a comment and I’ll do my best to help. 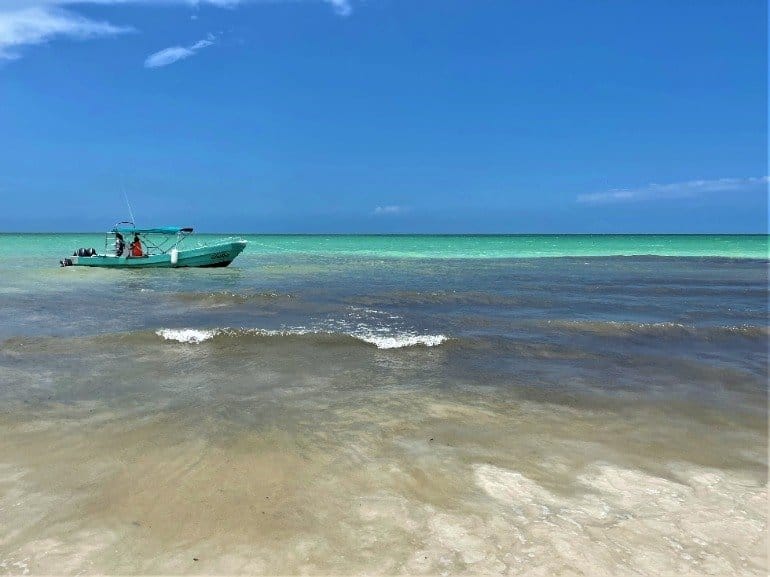 Whether you’ve already decided to visit the island of whale sharks or are still debating if it’s worth the visit, learning about what to do in Holbox, Mexico will no […] 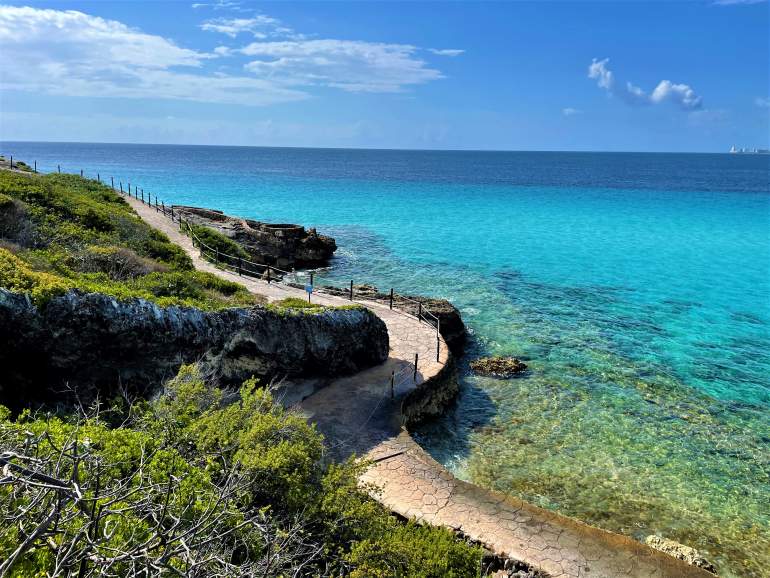 Of all the problems you can have, trying to decide between a visit to Isla Mujeres or Cozumel is a lucky one. Both islands share several characteristics—excellent snorkeling and white […]

2 thoughts on “Isla Mujeres or Holbox Island: Which Is Better?”