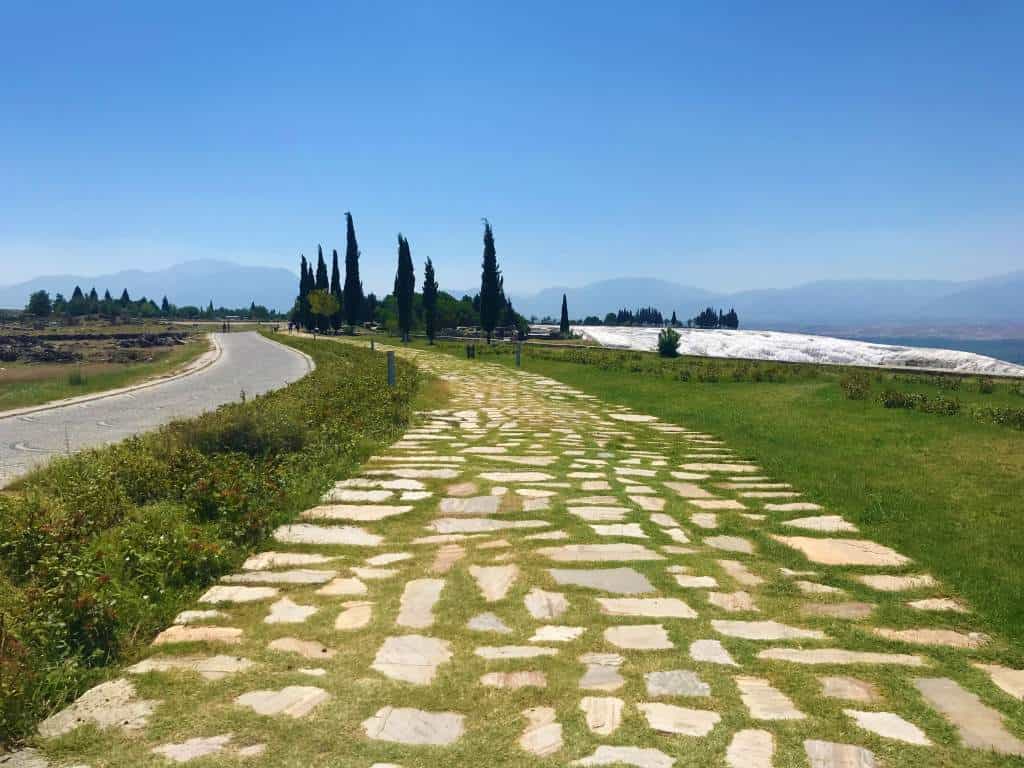 September 17, 2019By Laura OldsPosted in Pamukkale

Pamukkale and Cappadocia are two of Turkey’s most popular destinations.  And yet, when I was researching how to travel between the two, I came across next to no information.  Thanks to the help of a local Turk, I figured out how to take the bus from Pamukkale to Cappadocia and will share my experience here so that you can take this route, too.

Note: This post contains affiliate links. If you make a purchase, we’ll make a small commission at no cost to you. This is how we continue expanding the content on A Piece of Travel, so we thank you for your support.

The advantage of traveling by bus from Pamukkale to Cappadocia

If you’ve done research on traveling between Pamukkale and Cappadocia, you may have already come across an unfortunate reality- flying from Pamukkale to Cappadocia is impossible.

If you’ll be in Pamukkale and want to travel directly to Cappadocia, or vice versa, the most direct way is by vehicle.  Therefore, you can either rent a car and drive, or hop on an overnight bus and let someone do the driving for you while you (try to) get some zzzs.

Bus companies for the Pamukkale to Cappadocia route (and vice versa)

I traveled from Pamukkale to Cappadocia with the Metro Turizm bus company (often referred to as “Metro” for short).  At the time of my travels in July 2019, as far as I could tell, this was the only bus company that ran routes between Pamukkale and Cappadocia.

I purchased my bus ticket online, although it wasn’t the easiest feat, since Metro’s website only partially translates from Turkish to English.  So, I had to copy and paste a number of Turkish words into Google Translate to fill out their reservation form.

What to expect when purchasing your bus ticket online

There are a couple of items to note about buying a bus ticket from Pamukkale to Cappadocia (and vice versa).  Let’s take a look at these.

The bus station for Pamukkale is in the city of Denizli, which is a 15 – 20 minute ride from Pamukkale. Buses between Pamukkale and Denizli are frequent.

For Cappadocia, the bus station is located in Göreme. Therefore, when booking your ticket, you’ll need to book your route from Denizli to Göreme (or vice versa).

You’ll need to choose your seat as part of the booking process, but you should do so according to gender.

If you’re a man and book your seat next to a woman, or vice versa, it will be unexpected for the person sitting next to you. But, it’s unlikely that you’ll be asked to move.

If you’re traveling with someone of the opposite sex you can book your seats next to each other, regardless of your relationship (or lack thereof).

Contrary to what your initial impression likely is when you see the seating chart, Turkey is a liberal country when it comes to male and female interactions.

I stand firmly with the concept of people sitting beside whomever they wish, regardless of their gender. However, I must admit that as a single female traveler, it was comforting to know that I wasn’t going to have to put up with the possibility of sitting next to a creepy/drunk/etc. man during the overnight ride.

The cost of my bus ticket from Pamukkale to Cappadocia in July 2019 was 115 Turkish Lira.

Nowadays, it’s expected that when you make a purchase online, you’ll get an email confirmation.

That never came from Metro.

Thankfully, I had taken a screenshot of the confirmation page (all in Turkish) that appeared on their website when I made my payment.  Upon consulting with various locals, they confirmed that it’s normal not to receive an email confirming that your ticket has been purchased.

Moral of the story: Take a screenshot of your purchase on the bus company’s website and don’t worry if you don’t hear from the bus company ever again.

How to get your bus ticket

Since your bus ticket likely won’t arrive to you by email, you should plan to arrive at the bus station at least 30 minutes before your bus departs.  Go up to the Metro counter, show them your passport, and they’ll print your boarding pass.

The bus stations in Turkey have a security checkpoint at the entrance.  The checkpoint is quick and lenient compared to most airports.  You can leave your shoes on, your laptop in your bag, etc. No need to allow extra time for this.

Bus times from Pamukkale to Cappadocia (and vice versa)

My bus departed Pamukkale at 23:30 and arrived in Cappadocia at 9:15am.  The bus arrived with people already on it. We made a few stops along the way at bus terminals and for restroom and meal breaks.

How far in advance to book the bus

I booked my bus ticket about ten days before traveling from Pamukkale to Cappadocia.  This was during the high season and I was one of the first people to book a seat, according to the seating chart.

Therefore, it was to my surprise when the bus arrived in Pamukkale filled to the brim with passengers.

When talking with locals, it was hard for me to get a gauge on just how far in advance it’s recommended to book the Pamukkale to Cappadocia bus route (and vice versa).  So, I recommend doing it once you’ve got dates in mind for your trip.

From the conversations I had with locals, it appears that the bus route between Pamukkale and Capadoccia only runs during the high season.

In July, the seating chart showed daily departures for this bus route. However, before you go making any firm plans, you should check to make sure the bus will be running that day.

You can do a quick search on Metro Turizm’s website. Remember, the route you’re searching for is between Denizli and Göreme.

Amenities on the bus

Turkey is known for having good quality buses.  Admittedly, the particular bus I was on from Pamukkale to Cappadocia wasn’t one of the best I had been on…for Turkey. However, if you’re coming from Eastern Europe, you’ll feel like you struck bus gold.

There was a restroom on board, a private TV screen for each seat, and WiFi in theory, although I couldn’t get it to work.

My driver spoke enough English to convey basic information like how long our rest stops would be.  If your driver doesn’t speak good English, chances are high that you’ll find an English speaking Turk on board your bus.

Larger pieces of luggage must be stored under the bus and you’ll be given a luggage tag.  In my case, as was my experience elsewhere in Turkey, they didn’t check the bag tags upon arrival.

Lost/stolen luggage is uncommon.  Nevertheless, like anywhere in the world, it’s best to keep your valuables on the bus with you.

Quality of the road between Pamukkale and Cappadocia

The road between Pamukkale and Cappodocia is paved and well maintained.  Admittedly, I slept for much of the ride since it was an overnight bus, but I didn’t notice any point where there were lots of curves.

Most of the drive is along highways in the countryside, although we did drive through a number of towns, particularly to pick people up/drop people off.

Since you’ll be visiting both Pamukkale and Cappadocia, don’t miss my guides for setting realistic expectations in these beautiful destinations.

Pamukkale: What Influencers Don’t Tell You

I hope this post helped give you an idea about how to take the bus between Pamukkale and Cappadocia.  Do you have questions about this journey?  Have you taken this route yourself?  I’d love to hear from you in the comments section. 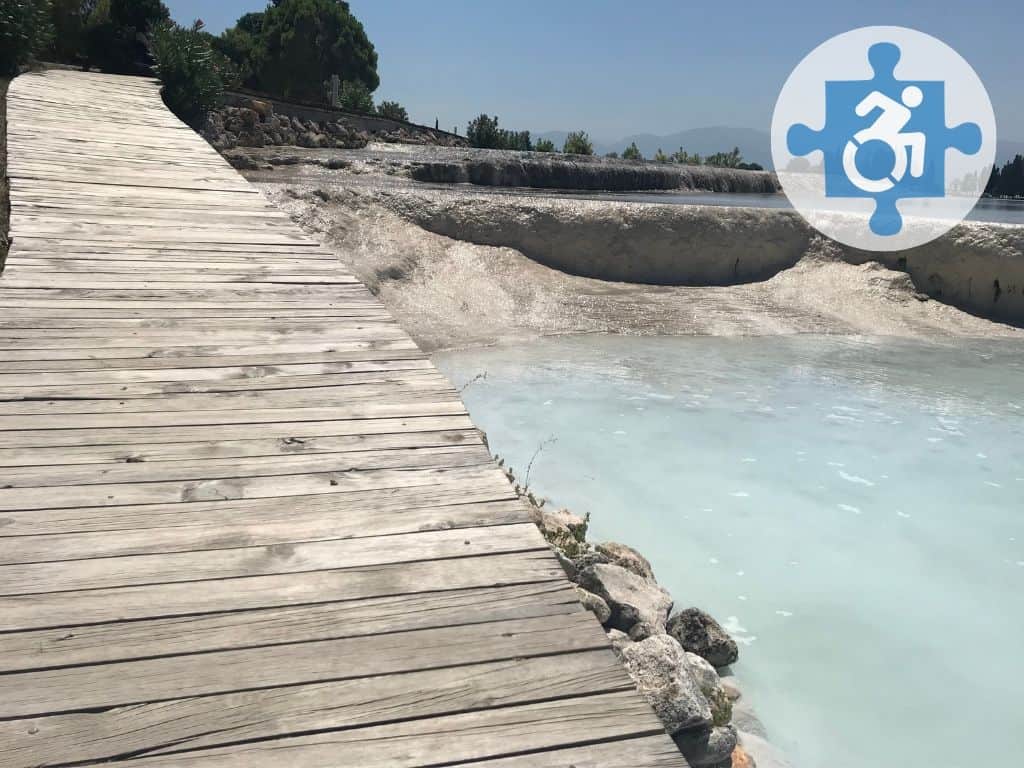 If you’re planning a trip to Turkey, you’ve surely seen photos of the white travertines in Pamukkale.  The good news is that it’s possible to visit Pamukkale with a wheelchair.  […] 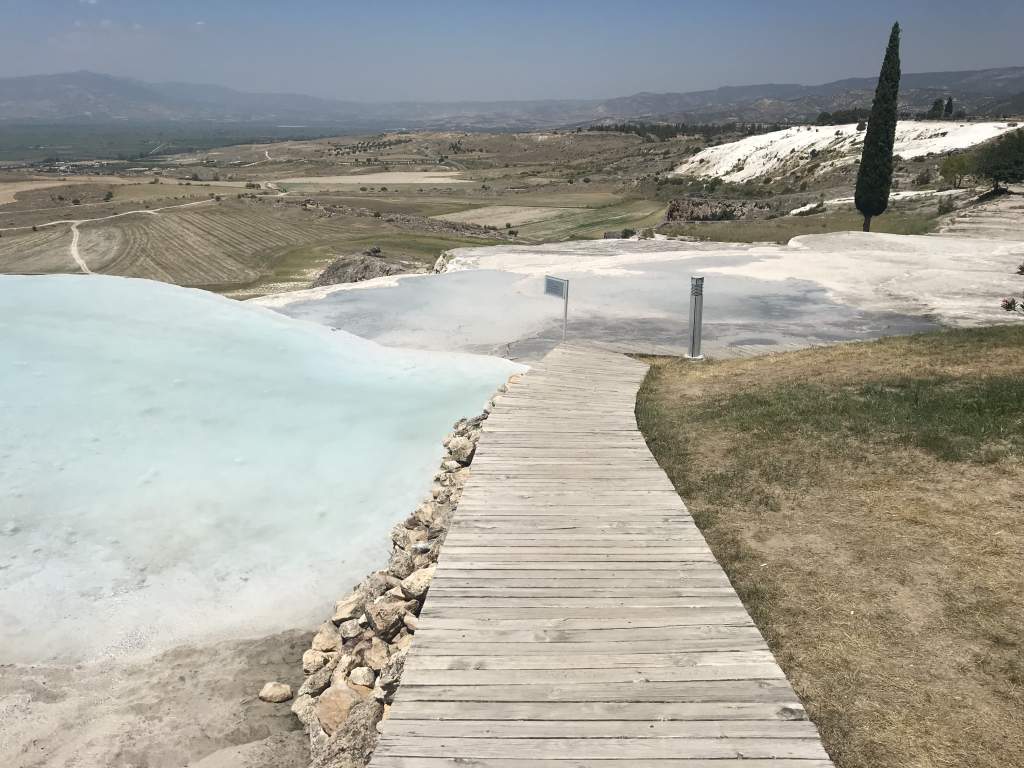 If you’ve researched places to visit in Turkey, you’ve likely seen the travertines of Pamukkale with their blue water, thanks in great part to Instagram influencers. Spoiler alert: Those pictures […]

2 thoughts on “Bus from Pamukkale to Cappadocia: Tips & Tricks”