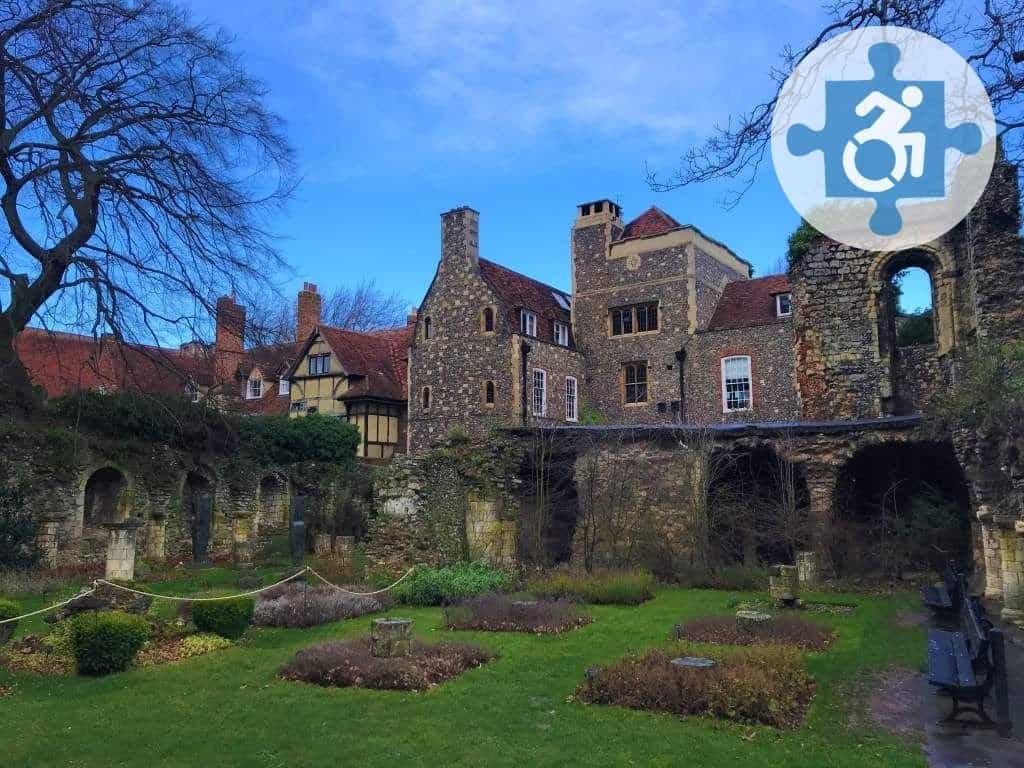 February 23, 2020By Laura OldsPosted in London

Located in Southeast England, the medieval town of Canterbury makes for both a wonderful day trip from London or a multi-day excursion. In this guide, we’ll talk about wheelchair accessibility in Canterbury, including getting around, things to do, and accessible restrooms.

We won’t beat around the bush here- Canterbury isn’t among the most wheelchair accessible destinations we’ve visited in England.

The reason lies mostly with the surface of streets and sidewalks in the walled historical center. While sidewalks are present on main roads in the center, they tended to be either narrow and/or made up of uneven brick and stone.

Even many parts of the main pedestrian streets are made up of cobblestone brick. The cobblestone is mild enough for just about any wheelchair to easily manage, but no doubt, you’ll feel the bumps.

We got to explore Canterbury well during our time there, as we spent over one week. As a rough estimation, we’d say that about 40% of shops and restaurants in the walled part of the city offer a flat entry or ramps.

That’s about on par with our experience in other English cities.

We’ll get into more specific details shortly about the most accessible sites in the city.

Like many cities in England, there’s a wheelchair logo on tourist signs pointing in the direction of accessible public restrooms.

There are accessible public restrooms on either end of the walled part of Canterbury- one on Canterbury Lane and the other on Tower Way.

If you haven’t yet heard of the RADAR key system in the U.K., make sure to check out this post so that you’re equipped with a key to enter.

In addition to public restrooms, there are accessible restrooms at paid sites such as the Canterbury Cathedral, Canterbury Tales, and the train stations.

Wheelchair Accessible Things to do in Canterbury

Now that we’ve talked a bit about general wheelchair accessibility in Canterbury, you’re surely wondering about the things to do there. Below is a list of nine activities that you can do in Canterbury as a wheelchair user.

Of all the places we visited in Canterbury, the Westgate Gardens was our favorite. These gardens are a part of a larger, four park complex called Westgate Parks, which all line the Stour River.

Westgate Gardens is easily accessible by rolling down High Street to the Westgate Towers. From there, take a left and follow the river. At this point, you’ll be on the outside of the walled city.

A paved, almost entirely flat path runs through the gardens. From there, you’ll get incredible views of the river, the stone wall of the city, and the traditional architecture of nearby houses and buildings.

There are a couple of small bridges, which are accessible, and offer great views down the river.

Although the Westgate Gardens borders the walled part of Canterbury, since it’s on the outside of the wall, we found that there were far fewer people than on Hight Street and around the Cathedral.

Also, when you exit the Westgate Gardens you’ll be able to continue along an even quieter path that follows the river.

Speaking of the Cathedral, it would be an injustice to Canterbury not to bring up this incredible piece of architecture and history early in our list of things to do.

The Canterbury Cathedral is famous for Archbishop Thomas Becket who was murdered by four knights who mistakenly believed that the king wanted the Archbishop dead. History lovers can easily spend a couple of hours exploring the cathedral and its expansive grounds.

Traditionally, the Canterbury Cathedral isn’t very wheelchair accessible. However, a number of accessible facilities have been designed to help the cathedral and its grounds be more wheelchair friendly.

For starters, wheelchair users can enter the Cathedral from an accessible parking lot or stroll in from the historical center (you’ll pass over some cobblestone if coming from the center).

You can read about detailed wheelchair accessibility on the Canterbury Cathedral’s website. However, below is a summary of the primary accessible facilities in place:

Photos for public use aren’t allowed inside the Cathedral. However, below are some photos outside of the Cathedral to give you a visual of some of the surfaces, elevator, and ramps you’ll encounter.

You can easily spend a half-day exploring the walled historic center of Canterbury. The center is compact but loaded with shops, restaurants, and old architecture.

The most notable streets in Canterbury include High Street and St. Margaret’s Street. Both of these are pedestrian streets and have a mix of cobblestone and smooth brick. Most likely, you’ll find yourself inclined to use the sidewalks, where possible, since they offer an overall less bumpy experience.

The streets in Canterbury can get very crowded as the day goes on. Therefore, if you’re looking to avoid lots of people and have more sidewalk space for your chair, we recommend doing your exploration in the morning.

Of the many wonderful things to do in Canterbury, one of our favorites was trying out the restaurants. The city is loaded with adorable cafes and restaurants, some traditional and some with a modern twist. We also came across plenty of vegetarian and vegan options.

Below are two of our favorite wheelchair accessible restaurants in Canterbury:

Lovers of theater will surely be enticed to watch a show at the Marlowe Theatre. Located in the historical center of Canterbury, the Marlowe Theatre has a modern design which makes it stand out from most other parts of the center.

As expected from modern design, the Marlowe Theatre is accessible. A flat entry leads inside the building. From there, elevators will take you to all three floors where there’s a total of twelve accessible spaces. There are also six wheelchair spaces in The Studio. Accessible restrooms are located on every floor of the theater.

You can read more about accessibility at the Marlowe Theatre here and as well as check out upcoming shows.

The Canterbury Castle is located about a ten minute stroll in the direction of Wincheap, outside of the walled city.

During our December 2019 visit, the castle was closed for maintenance due to falling debris. However, given that the Canterbury Castle is so small, mainly because it’s mostly castle ruins, you can quite easily admire the structure from outside the gate.

When the castle does reopen, from our outside observation it appears that the ruins are accessible via a dirt path winding around the small property.

Is it worth the visit?

In our opinion, visiting the Canterbury Castle is only worth visiting if you’ll be spending multiple days in Canterbury.

We’ve already talked about the Westgate Gardens, but the gardens are part of a much larger path called the Riverwalk.

You can start the Riverwalk from either side of the Westgate Towers, just outside the city wall. From there, you’ll soon arrive in a quieter, nature setting.

The path is paved, although we came across plenty of areas where the pavement was buckling up. For the most part, the path is accessible. However, there are certain points where you may have to take a small detour as a result of some steps.

When you’re exploring the historical center, you’re bound to stumble upon an old stone building on St. Margaret Street, which is called The Canterbury Tales.

A flat entry leads into the building. From there, you’ll be able to access the different floors via an elevator. The staff is well trained in supporting wheelchair users with getting around the rooms, as there are times when there are some steps requiring an alternative route. Keep in mind that the lighting is dim in most of the rooms, but the surfaces are flat.

You can read about detailed accessibility in each of the rooms at The Canterbury Tales here.

The Goods Shed is an indoor market located by the West Canterbury Train Station.

While loving markets is in our blood, The Goods Shed is a very small, boutique-style market, which threw us off a bit since it felt more like a store than a market. However, the old building and decor are beautiful.

Wheelchair accessibility at The Goods Shed is mediocre at best. At face value, it’s accessible. A long, wooden ramp leads inside the one-story building, which has concrete floors on the inside.

However, space is tight as the aisles are narrow. Also, the only tables low enough for wheelchair users are located up a set of stairs. For this reason, we only recommend a visit to The Goods Shed if you’ll be by the West Canterbury Train Station and have some time to spare before taking your train.

Canterbury didn’t “wow” us with its wheelchair accessibility, but there are enough accessible facilities in place to make a trip there worth the visit.

Do you have questions about wheelchair accessibility in Canterbury? Send us a message and we’ll be glad to help. If you’ve already explored Canterbury as a wheelchair user, we’d love to hear about your experience, tips, and favorite areas to visit.

P.S.- Will you be taking other day trips from London? Make sure to check out our wheelchair guides on Oxford, the White Cliffs of Dover, and Guildford. 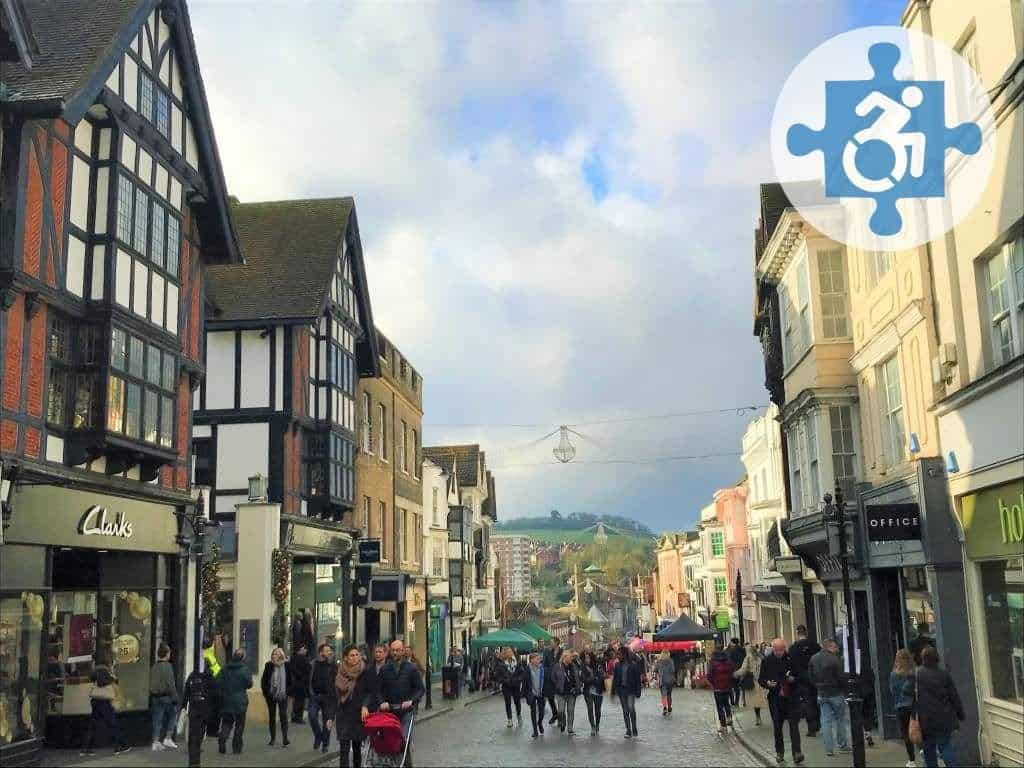 Oxford. The word likely conjures up thoughts of academia, history, architecture, and Harry Potter. If you’ll be spending more than a couple of days in London, a visit to Oxford […]