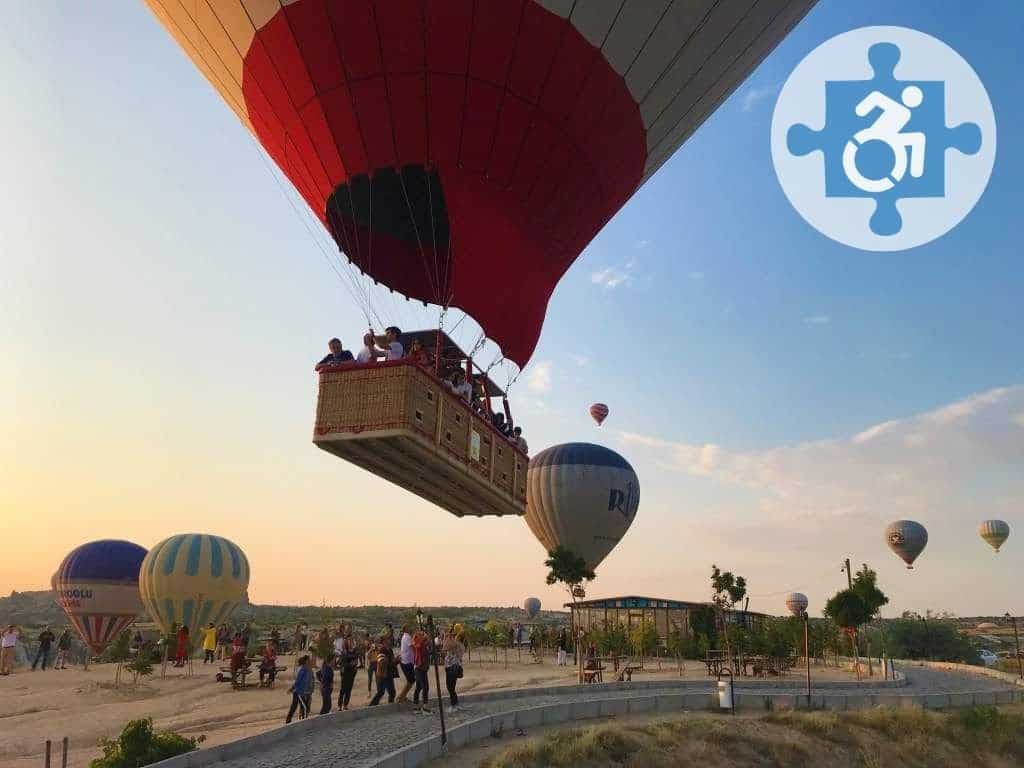 10 Amazing Accessible Things to do in Cappadocia

September 12, 2019By Laura OldsPosted in Cappadocia

Cappadocia will make you feel like you’ve stepped into a fairytale. Every morning, hundreds of balloons float over rock formations, fittingly called fairy chimneys. By day, Cappadocia offers outdoor adventures, ceramic workshops, and weaving demonstrations. This guide will show you the many wheelchair accessible things to do in Cappadocia.

Note: This post contains affiliate links. If you make a purchase, we’ll make a small commission at no cost to you. This is how we continue expanding the content on A Piece of Travel. Thank you for your support!

Overview: How accessible is Cappadocia?

This post is about showcasing the accessible things that wheelchair users can do in Cappadocia and we’re going to get there, we promise. But first, it’s important that we acknowledge the reality of accessibility in Cappadocia.

With time and awareness, we hope that accessibility in Cappadocia improves. But for now, know that in order to experience most of the activities described below, you’ll encounter dirt roads, bumpy paths, and curbs.

Accessible things to do in Cappadocia

Let’s jump into the things that you’ll be able to do in Cappadocia as a wheelchair user. Keep in mind that the outdoor sites listed here don’t offer much shade, since there’s not a lot of tall vegetation in the area. Therefore, make sure to bring sun gear.

Unfortunately, hot air balloon rides in Cappadocia aren’t accessible. However, the next best thing is watching the balloons from the Göreme viewpoint.

Seeing the hot air balloons requires an early morning since the balloons only operate at sunrise. However, we recommend getting to the viewpoint extra early so that you can create an accessible parking spot that gives you plenty of room to get out of the vehicle.

Once at the viewing area, you’ll have a wide, flat surface for watching the hot air balloons. Some of the balloons float over the viewpoint, coming so close that you’ll practically be able to touch the basket.

An advantage of getting to the viewing area before the balloons take off is that you can watch the balloons fill up in the valley below. It’s an incredible sight!

Travel Tip: Make sure you’re in Cappadocia for at least two sunrises to increase your chances of seeing the famous flight, since the hot air balloon rides are cancelled if the wind is over 10 km/hr.

The Uçhisar Castle is built entirely inside of a rock. A lot of well known political figures have called the Uçhisar Castle home throughout the years. Due to its strategic location, the castle was used as a defense for Cappadocia.

For a time in more recent history, the Uçhisar Castle was turned into apartments for locals. However, pieces of rock started falling from the ceiling, so residents moved out. Entering the castle is now banned.

As for accessibility at Uçhisar Castle, there’s a short, dirt path that leads directly from the road to a small viewpoint. This is about as far as you’ll be able to comfortably go by wheelchair, but it offers an excellent panoramic view of the castle and nearby fairy chimneys.

Below are some photos to give you a visual of what to expect:

Although going inside the transformed rocks isn’t accessible due to stairs, you can stroll around some of the cobblestone paths that weave through the property.

That being said, the Tokali Church, which is located across the street from the main part of the museum, is accessible. This church is undergoing restoration but has some of the best fresco paintings remaining in the area.

They don’t allow photos inside the church. However, below is a photo of the Tokali Church sign as a reference.

From the Love Valley lookout point, you’ll get to enjoy beautiful views of rock formations in the shape of…ahem…we’ll leave it to your imagination.

You’ll be able to drive right up to the lookout point. The lookout area is mostly flat with a dirt path and a bit of gravel. In addition to the views, there are some trees decorated with pots and adornments, which is fairly common for Cappadocia and makes for great photos.

Speaking of great photos, the iconic swings found along the Love Valley lookout area are accessible, so you can take your picture in front of them.

The tiny town of Avanos is known for its pottery, using the local red clay from the Kızılırmak River. The word “factory” is a bit of a misnomer here, since much of the pottery is handmade, using a traditional kick wheel.

There are a number of pottery factories to choose from that offer free demonstrations of pottery making. Kapadokya Seramik is the one that we visited, which has been in the family for many generations.

There’s a single, approximately 3″ ledge to get inside Kapadokya Seramik. From there, everything is on one floor. Many, but not all, of the aisles in the pottery rooms are wide.

While you’re out and about exploring the areas we’re covering here, two things are certain:

Han Restaurant has you covered on both accounts. This buffet-style restaurant is located in the town of Avanos. An elevator takes you to the second floor of the building where you’ll encounter an accessible restroom, rows of traditional Turkish food, and wide aisles to get around.

This is a popular restaurant stop for guided tours, but given that the restaurant can hold over 500 people, getting a table typically isn’t an issue.

Vegetarians and vegans will have options here, as there’s a large salad section. There are also lots of traditional Turkish cold appetizers that are vegetarian and/or vegan-friendly.

The Sentez Avanos Hal Carpet is a government-sponsored cooperative designed to help locals get back to their roots of hand-weaving carpets. You’ll get to watch them weave and see how silk is spun.

As expected from free artisan demonstrations, they’ll also show you carpets for purchase. However, since this facility is supported by the government, there isn’t much pressure to buy.

Sentez Avanos Hal has multiple, spacious rooms, making it easy to navigate with a wheelchair.

Devrent (aka Magic) Valley is a fun stop on your Cappadocia explorations. You don’t even have to get out of your car to admire the fun shapes of the rock formations in the area.

However, if you do get out, you can go to a little dirt viewing area that’s accessible.

Some of the shapes require a good dose of imagination, while others are so obvious that in the case of the camel, they had to build a fence around the rock to keep people from climbing on it.

It’s best to visit Devrent Valley with a local or guidebook so you don’t miss spotting a rock figure. Below are a few figures to look out for:

If you’re confused about what mushroom caps are, let us show you with the picture below.

Paşabağ is on the World Heritage List. Although it isn’t perfectly accessible, with inaccessible paths leading from the main path, you’ll be able to make a loop around the entire park. The surface is mostly brick, with some areas being borderline cobblestone.

The two photos below should help to give you an idea of the range of surfaces you’ll encounter.

Before you get too excited, seeing Pigeon Valley isn’t as neat as it sounds. That being said, the concept of how Pigeon Valley got its name is a neat one.

Pigeons used to be a staple in the Cappadocian diet and their excretions made excellent fertilizer. Therefore, locals carved hundreds of little holes as pigeon homes in the rocks of Pigeon Valley to encourage the pigeons to stay around.

No doubt, pigeons still use their homes. However, the rocks are a good distance from the viewing area. Therefore, in order to get the pigeons closer, they built a stand where you can buy food and throw seed to the pigeons.

There were maybe fifty or so pigeons when we were there. You can see far more pigeons at just about any plaza, anywhere in the world.

Nonetheless, Pigeon Valley is worth mentioning because first and foremost, the viewing area is accessible. It’s a long, flat, dirt strip that you’ll be able to wander along. Secondly, Pigeon Valley is near Göreme and Uçhisar, two of the most commonly visited areas of Cappadocia.

Now you know the accessible places to visit in Cappadocia, but how do you get around?

Hatti Travel is an agency that can support you with your Cappadocia trip. You can either book one of their pre-arranged packages or design an itinerary of your own. In either case, they are experienced in arranging accessible trips and have the mobility equipment to get you where you want to go.

You can contact Hatti Travel here for a custom quote.

Accessible hotels in Cappadocia are hard to come by, so Tourist Hotels & Resorts is a good- and essentially the only- option. This hotel is located in the town of Göreme, the hub for all things tourism in Cappadocia. They have one accessible room.

It may not come as a surprise at this point that the town of Göreme, where most people stay when visiting Cappadocia, isn’t perfectly wheelchair accessible.

Nevertheless, the main part of the town around the mosque is flat and has dropped curbs (or curbs that are dropped enough to be manageable). There are lots of shops and restaurants that run along sidewalks in this area.

If you venture outside of the flat center of Göreme, you’ll encounter steep hills, cobblestone in a number of areas, and crazy drivers.

Everyone has their own comfort level when it comes to adventure, so you’ll be the best judge on how much of Göreme you’re comfortable exploring without a vehicle.

Cappadocia is a must-see destination in Turkey. Although it wasn’t designed with wheelchair accessibility in mind, it’s possible to explore many parts of Cappadocia with a chair.

Do you have questions about accessible travel in Cappadocia? Have you traveled to Cappadocia with a wheelchair? Leave a comment, we’d love to hear from you!

P.S.- Traveling to Pamukkale? Check out our post on A Wheelchair User’s Guide to Pamukkale, Turkey. 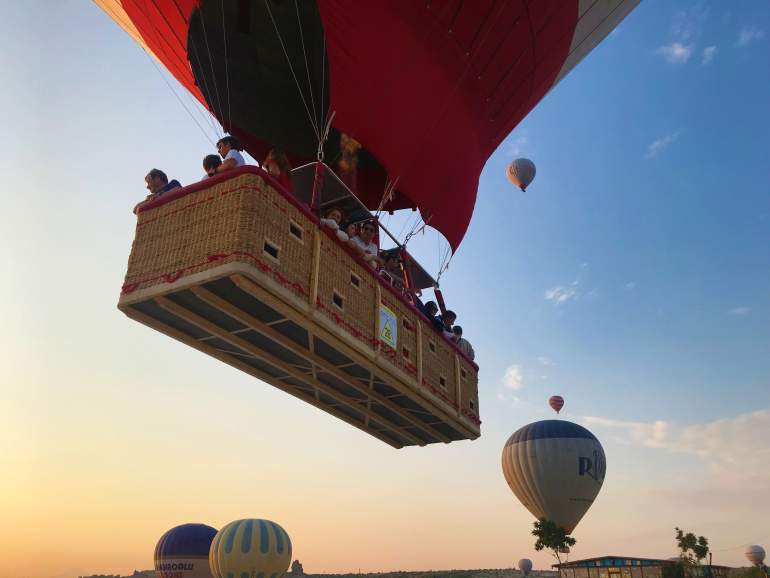 There are three things certain in life- death, taxes, and fluctuating Cappadocia hot air balloon prices. As a traveler, it’s natural to want to pay a fair price for a […] 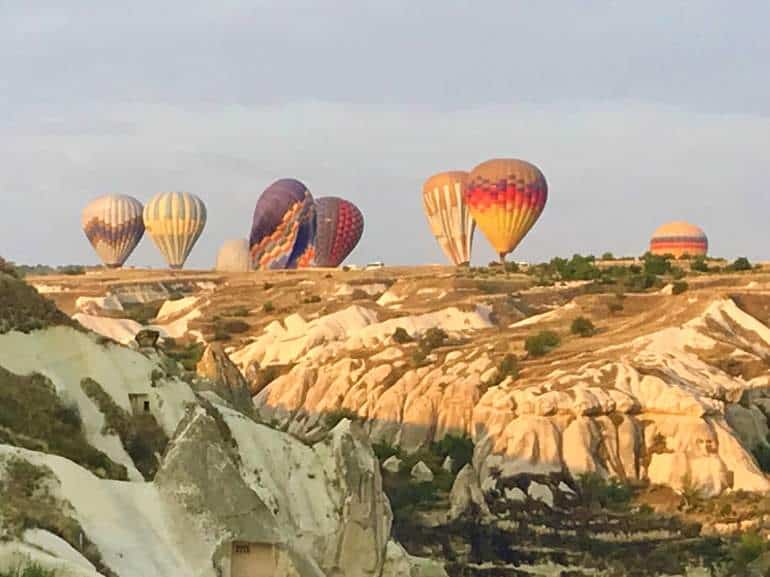 Ugh. You’re either reading this because you received news that your hot air balloon ride in Cappadocia has been cancelled or because you have a hunch that it might be. […]

2 thoughts on “10 Amazing Accessible Things to do in Cappadocia”